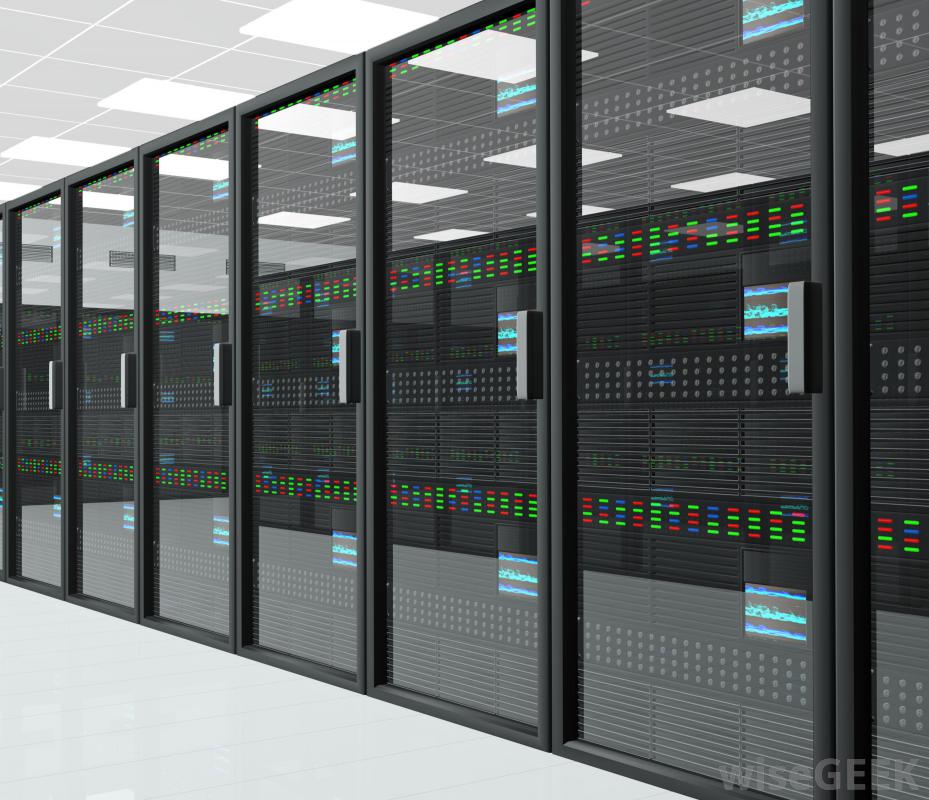 This topic aims to explain the Quorum configuration in a Failover Clustering. As part of my job, I work with Hyper-V Clusters where the Quorum is not well configured and so my customers have not the expected behavior when an outage occurs. I work especially on Hyper-V clusters but the following topic applies to most of Failover Cluster configuration.

A Failover Cluster Quorum configuration specifies the number of failures that a cluster can support in order to keep working. Once the threshold limit is reached, the cluster stops working. The most common failures in a cluster are nodes that stop working or nodes that can’t communicate anymore.

Imagine that quorum doesn’t exist and you have two-nodes cluster. Now there is a network problem and the two nodes can’t communicate. If there is no Quorum, what prevents both nodes to operate independently and take disks ownership on each side? This situation is called Split-Brain. Quorum exists to avoid Split-Brain and prevents corruption on disks.

The Quorum is based on a voting algorithm. Each node in the cluster has a vote. The cluster keeps working while more than half of the voters are online. This is the quorum (or the majority of votes). When there are too many of failures and not enough online voters to constitute a quorum, the cluster stop working.

Below this is a two nodes cluster configuration:

The majority of vote is 2 votes. So a two nodes cluster as above is not really resilient because if you lose a node, the cluster is down.

Below a three-node cluster configuration: 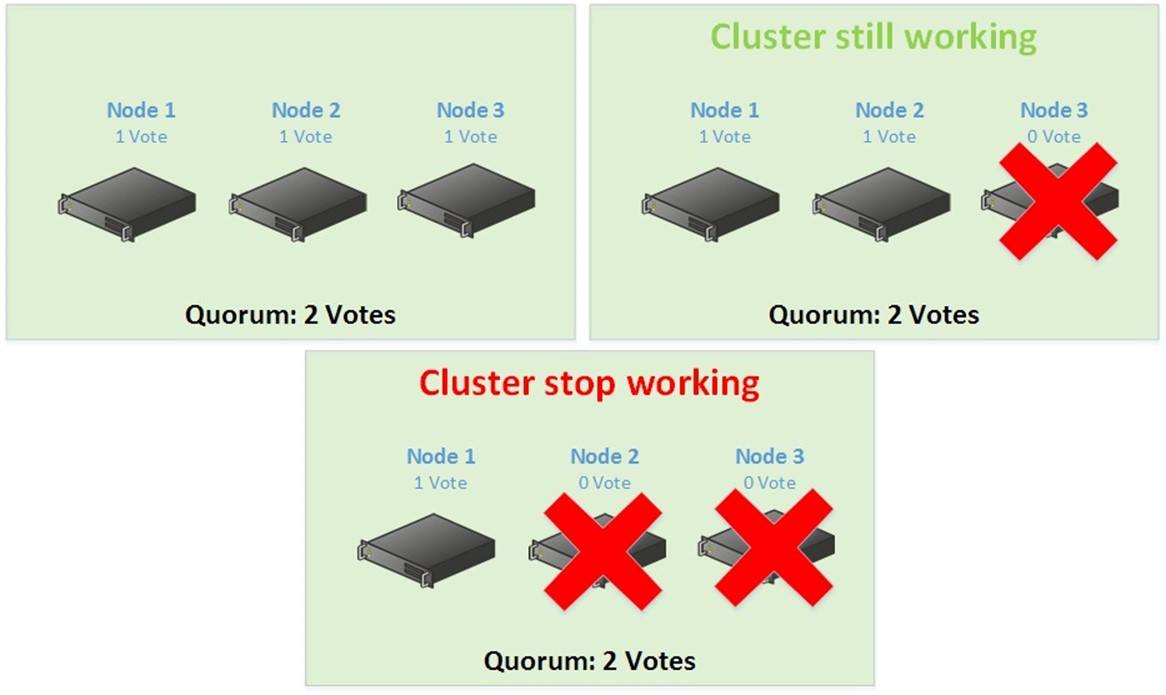 Now you add a node in your cluster. So you are in a three-node cluster. The majority of vote is still 2 votes. But because there is three nodes, you can lose a node and the cluster keep working.

Below a four-node cluster configuration: 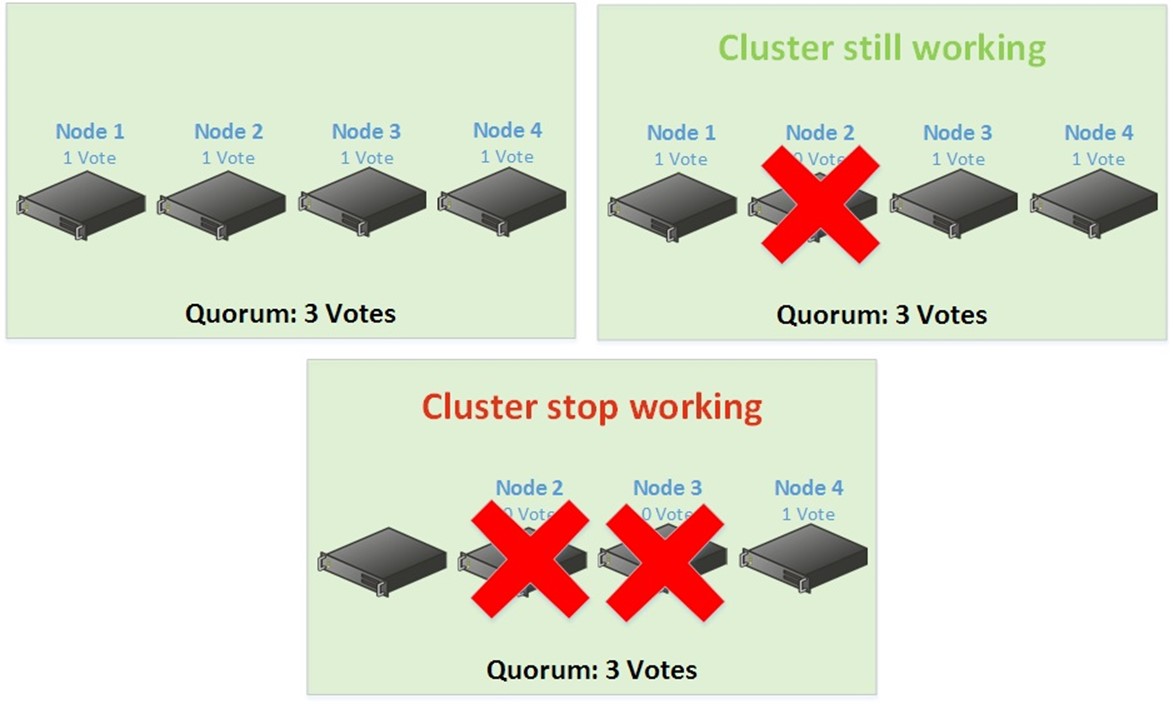 Despite its four nodes, this cluster can support one node failure before losing the quorum. The majority of vote is 3 votes so you can lose only one node.

On a five-node cluster the majority of votes is still 3 votes so you can lose two nodes before than the cluster stop working and so on. As you can see, the majority of nodes must remain online in order to the cluster keeps working and this is why it is recommended to have an odd majority of votes. But sometimes we want only a two-node cluster for some application that don’t require more nodes (as Virtual Machine Manager, SQL AlwaysOn and so on). In this case we add a disk witness, a file witness or in Windows Server 2016, a cloud Witness.

As said before, it is recommended to have an odd majority of votes. But sometimes we don’t want an odd number of nodes. In this case, a disk witness, a file witness or a cloud witness can be added to the cluster. This witness too has a vote. So when there are an even number of nodes, the witness enables to have an odd majority of vote. Below, the requirements and recommendations of each Witness type (except Cloud Witness):

So below you can find again a two-nodes Cluster with a witness:

Below you can find the four possible cluster configuration (taken from TechNet):

So the customer tells me: Ok I’ve followed the recommendation because I have four nodes in my cluster but I have added a witness to obtain an odd majority of votes. So let’s start the production. The cluster is running for a while and then one day the room 1 is underwater. So you lose Room 1:

In this scenario you should have also a stretched storage and so if you have implemented a disk witness it should move to room 2. But in the above case you have lost the majority of votes and so the cluster stop working (sometimes with some luck, the cluster is still working because the disk witness has time to failover but it is lucky). So when you implement a stretched cluster, I recommend the below scenario:

In this scenario, even if you lose a room, the cluster still working. Yes I know, three rooms are expensive but I have not recommended you to make a stretched cluster J (Hyper-V case). Fortunately, in Windows Server 2016, the quorum witness can be hosted in Microsoft Azure (Cloud Witness).

Dynamic Quorum enables to assign vote to node dynamically to avoid to lose the majority of votes and so the cluster can run with one node (known as last-man standing). Let’s take the above example with four-node cluster without quorum witness. I said that the Quorum is 3 votes so without dynamic quorum, if you lose two nodes, the cluster is down.

Now I enable the Dynamic Quorum. The majority of votes is computed automatically related to running nodes. Let’s take again the Four-Node example: 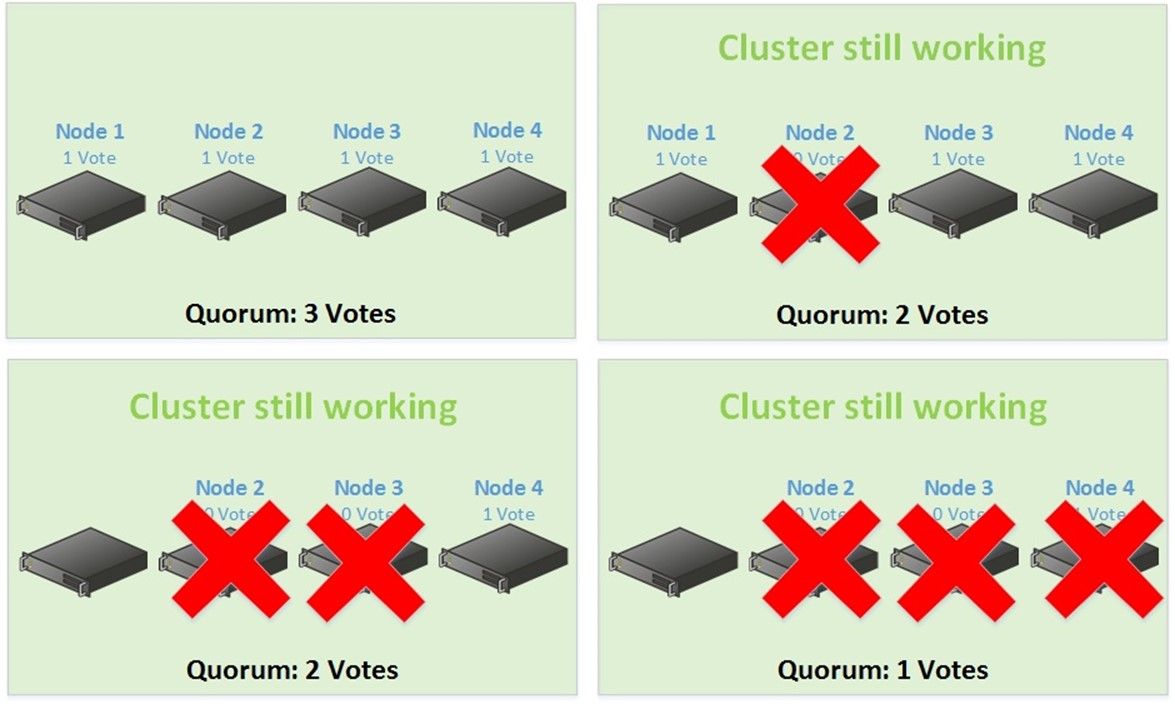 So, why implementing a witness, especially for stretched cluster? Because Dynamic Quorum works great when the failure are sequential and not simultaneous. So for the stretched cluster scenario, if you lose a room, the failure is simultaneous and the dynamic quorum has not the time to recalculate the majority of votes. Moreover I have seen strange behavior with dynamic quorum especially with two-node cluster. This is why in Windows Server 2012, I always disabled the dynamic quorum when I didn’t use a quorum witness.

The dynamic quorum has been enhanced in Windows Server 2012 R2. Now there is the Dynamic Witness implemented. This feature calculate if the Quorum Witness has a vote. There is two cases:

So since Windows Server 2012 R2, Microsoft recommends to always implement a witness in a cluster and let the dynamic quorum to decide for you.

By implementing a Cloud Quorum Witness, you avoid to spend money on a third room in case of stretched cluster. Below this is the scenario: 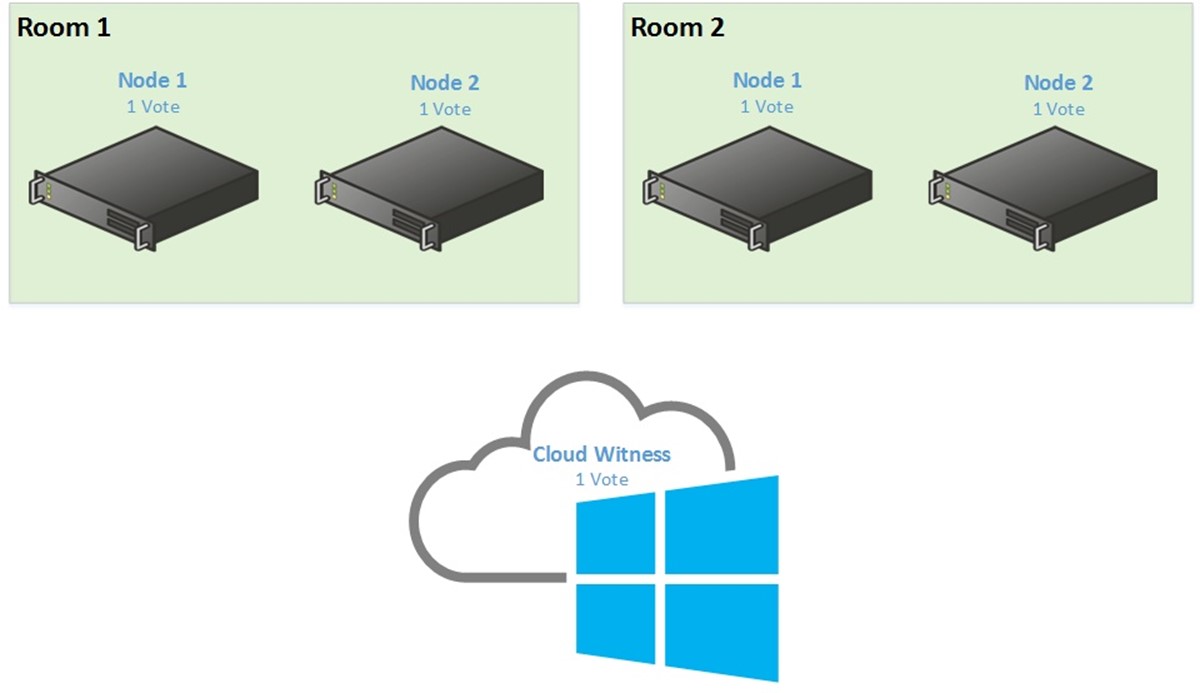 The Cloud Witness, hosted in Microsoft Azure, has also one vote. In this way you have also an odd majority of votes. For that you need an existing storage account in Microsoft Azure. You need also an access key.

Now you have just to configure the quorum as a standard witness. Select Configure a Cloud Witness when it is asked. 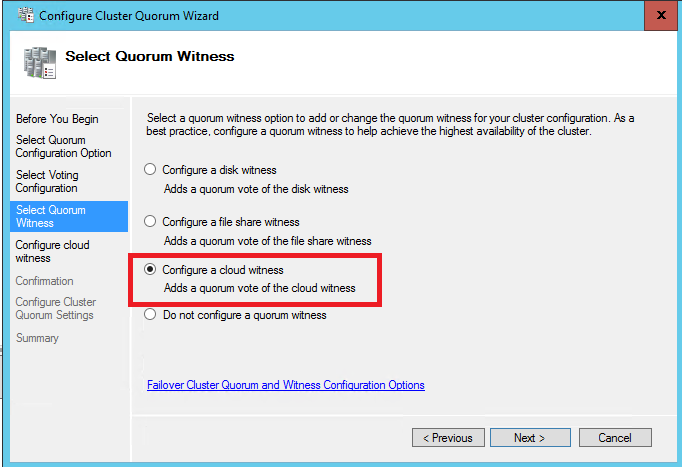 Then specify the Azure Storage Account and a storage key. 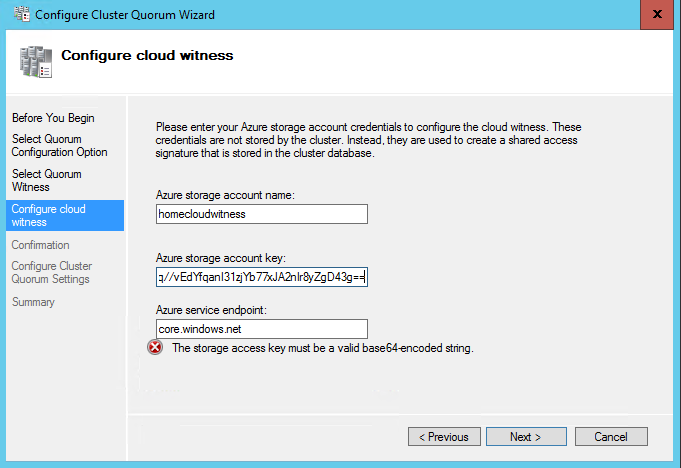 At the end of the configuration, the Cloud Witness should be online.

In conclusion I recommend this when you configure a Quorum in a failover cluster: 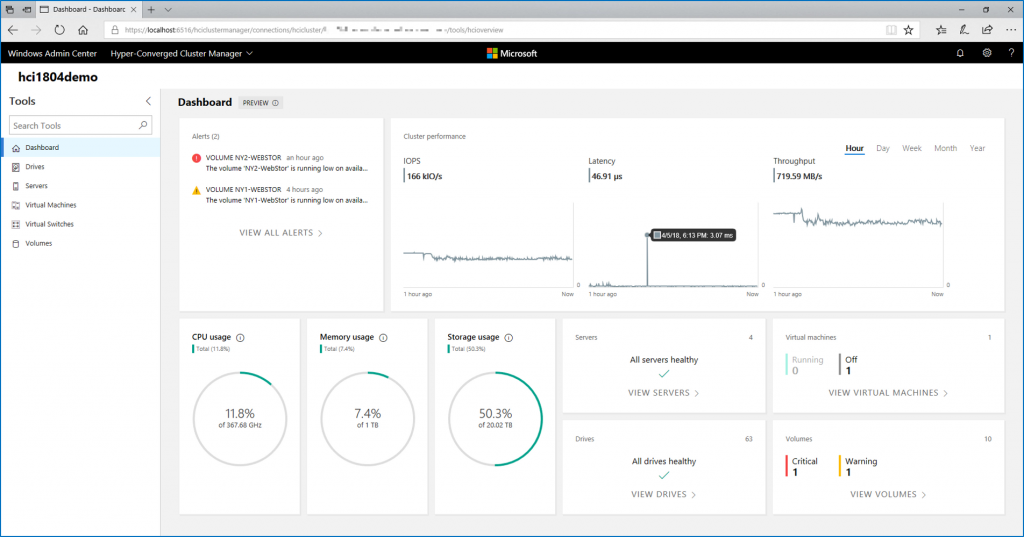 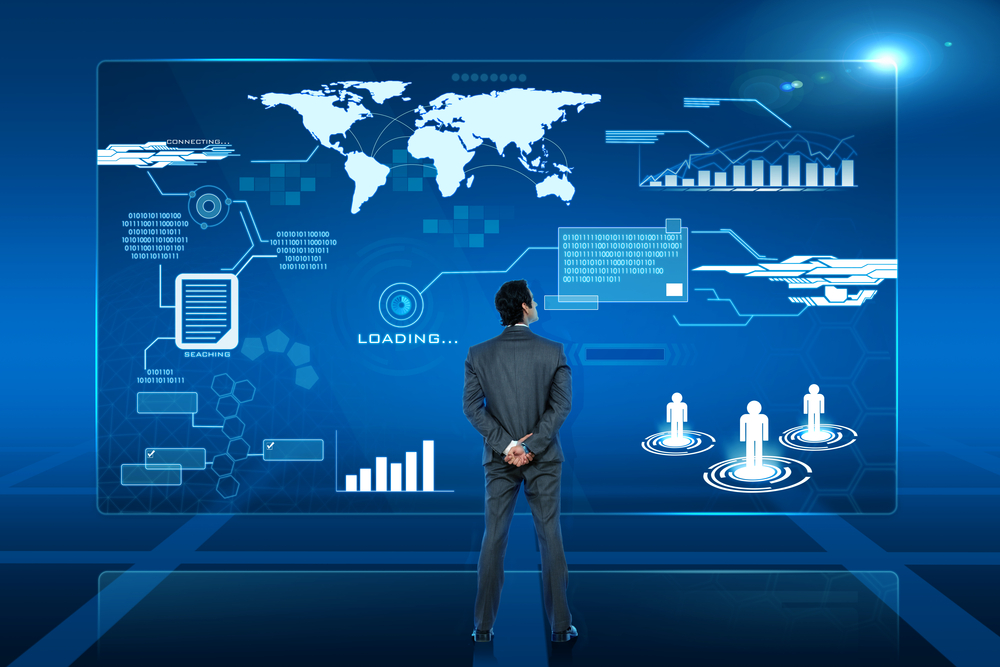 Before Windows Server 2016, the alerting and the monitoring of the cluster were managed by ... 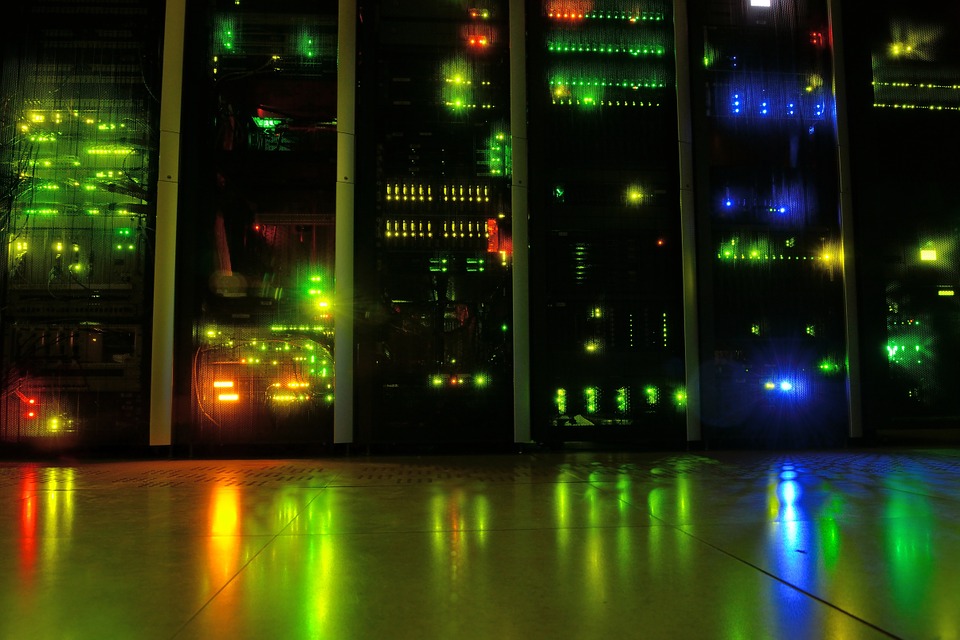 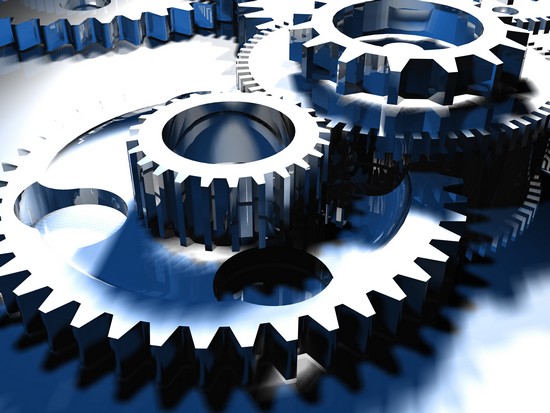 Upgrade your SOFS to Windows vNext with Rolling Cluster Upgrade

The next release of Windows Server will provide a new feature called Rolling Cluster Upgrade. ...