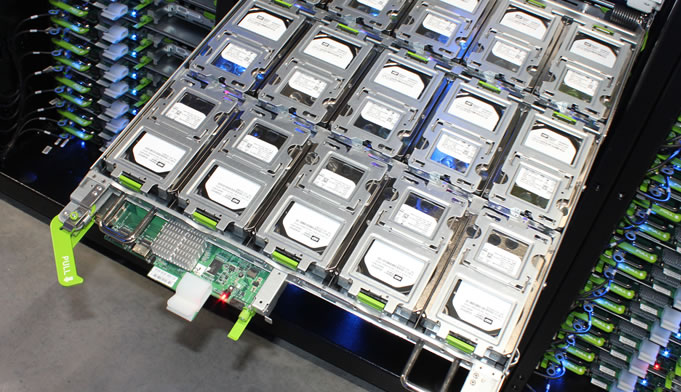 A 2-node hyperconverged cluster is useful in branch office where you need high availability or for small infrastructure. With 2-node hyperconverged solution, you don’t need to leverage a NAS or a SAN for the shared storage. So, the hardware footprint is reduced and the manageability is improved because hyperconverged solution are easier to use than standard infrastructure with SAN. VMware provides a Software-Defined Storage solution called vSAN. vSAN can be deployed from 2 nodes to 16 nodes. 2-node cluster should be used for ROBO (Remote Office and Branch Office).

Why you need a witness appliance

vSAN is something like a RAID over the network. vSAN currently supports RAID 1 and RAID 5/6. When you deploy a 2-node vSAN cluster, only the RAID 1 is available. When a VM objects such as VMDK is stored in vSAN, the data is written to a node and replicated to another (such as classical RAID 1 across two physical disks). So, two components will be created: the original data and the replica.

In vSAN environment, a storage object such as VMDK need more than half its components alive to be ready. So, in the above vSAN cluster, if a node is down, you lose half of the VMDK components and so the VMDK is not ready anymore. Not really a resilient solution :).

To solve this issue, VMware has introduced the vSAN Witness Appliance. Thanks to this appliance, in addition of these two components, a witness will be created. So even if you lose a node or the witness appliance, more than half of the components are available.

The witness appliance is provided by VMware from an OVA file. It is free and a special license is provided with the appliance. So, it is really easy to deploy.

The storage adapter provided by the D1520D4i motherboard is not in the vSAN HCL. I strongly recommend you to check HCL before buying hardware for production.

To compute the memory resource needed for vSAN you can use this formula provided by VMware:

My node requires at least 6,3GB of free memory for vSAN.

I also recommend you the following PDF:

To deploy the witness appliance, navigate to vSphere web client and right click on the cluster or node where you want host the appliance. Select Deploy OVF template.

Next choose a host or a cluster to run the witness appliance.

In the next screen, you can review the details of the OVF that you deploy. As indicated in the below screenshot, the product is VMware Virtual SAN Witness Appliance.

Next accept the license agreements and click on next.

Then choose a storage where you want to store the witness appliance files.

Next choose the network to connect the witness appliance.

Once the witness appliance is deployed, you can start it. Then open a remote console.

When the appliance has started, you can configure the network like any ESXi nodes.

So, I set the network by configuring static IP. I also configure the name of the appliance and I disable IPv6.

When I have finished the settings, my appliance looks like this:

The witness appliance can be added to vCenter like any ESXi nodes. Just right click on a datacenter or folder and select Add host.

Next provide connection settings and credentials. When you are in assign license screen, select the license related the the witness appliance.

When you have finished the wizard, the witness appliance should be added to vCenter.

Once you have added the witness appliance, navigate to Configure | VMKernel Adapters and check if vmk1 has vSAN traffic enabled.

Because my two nodes are already in a DRS cluster, I have to turn off the vSphere HA. You can’t enable vSAN in a cluster where vSphere HA is enabled. To turn off vSphere HA, select the cluster and select Configure | vSphere Availability.

Next navigate to Virtual SAN and select General. Then click on Configure.

Then I enable the Deduplication and Compression and I choose Configure two host Virtual SAN cluster.

Next the wizard check if vSAN adapters are available.

Then the wizard claims disk for cache tier and capacity tier.

Next choose the witness appliance and click on next.

Next, you should have a disk for the cache tier and another for the capacity tier. Just click on next.

When vSAN is enabled successfully, you should have three servers and at least three diskgroups (2 nodes and the witness appliance).

In Fault Domains & Stretched Cluster you should have something like this screenshot. The witness host should be enabled. You can see that the 2-node configuration is the same as stretched cluster.

Now you can enable again the vSphere HA as below.

After moving a virtual machine to vSAN, you can see the below configuration. The VMDK has two components and a witness. Even if I lose one of the components or the witness, the VMDK will be ready.

To avoid warning because of datastore heartbeat is disabled (number of vSphere HA heartbeat datastore for this host is 0, which is less than required:2), you can add the following line in advanced options:

For vSAN configuration, VMware recommends to enable Host Monitoring and change the response for host isolation to Power off and restart VMs. Thanks to Host Monitoring, the network will be used as heartbeating to determine the state of a host. The datastore with PDL (Permanent Device lost) and APD (All Path Down) should be disabled (for further information read this documentation). To finish, configure the VM Monitoring as you wish.

VMware vSAN provides an easy way for HA VM storage in branch office. If I compare with Microsoft Storage Spaces Direct, the 2-Node vSAN cluster is more complex to deploy because of the Witness Appliance. This appliance requires a third ESXi node in the same site or another datacenter. With Storage Spaces Direct, I can use a simple file share or Microsoft Azure as a Witness. Except this issue, vSAN is a great solution for your hyperconverged infrastructure.